Home / Blog / Back to the Databases: How Records Can Preserve Rare Plants

While its appearance is not very showy, and looking at it you might not expect it to be anything special, the Small whorled pogonia (Isotria medeoloides) is a globally rare orchid. Found mainly in the forests of Northeastern US and Canada, it was believed to be extirpated in Vermont until just this year where a small population of the plant was discovered!

Plants, like animals, are vulnerable to extinction/extirpation and require protection and conservation measures to ensure their survival. The Small whorled pogonia being identified in Vermont is a great example of a success story for rare plant species. 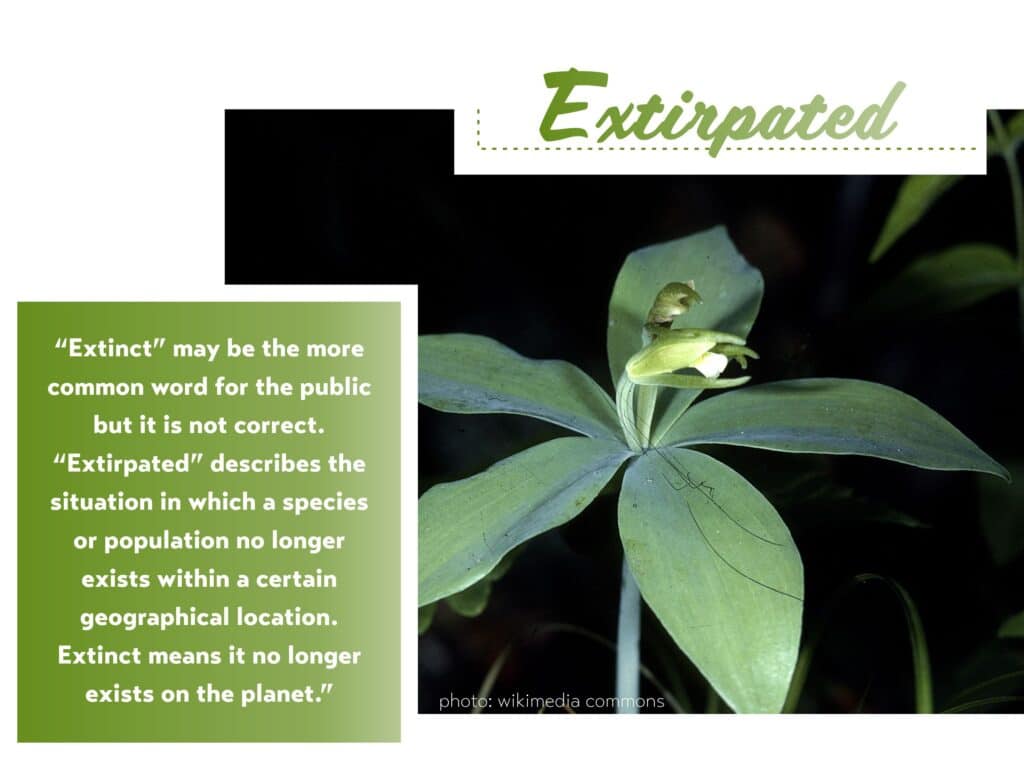 Conservation and protection of plant species receives the least amount of consideration globally. Most studies, action plans, and funding are allocated for rare, threatened or endangered mammals and birds. Over the last 150 years, there has been a distinct pattern of decrease in the number of native plant species along with an increase in nonnative plant species across New England. Much of this is due to loss of habitat that occurs as a result of ground disturbing activities in areas that could potentially be undocumented rare species habitat. The combined trend in decreasing number of species and increasing loss of habitat have resulted federal and state agencies looking into alternative ways to conserve and protect rare plant species and habitat by utilizing available information.

One study of rare plants revealed that New Hampshire experienced a decline of 8.4% in rare plant occurrences between the years of 1996 and 2012. One of the tools that was used for this study was herbarium records, which shows how valuable these types of records are for conservation reasons. Biologists were able to take the data from a herbarium record into the field to verify if the plants still existed in the locations that were noted in the records. Additionally, field verification of plants were identified in the historic herbarium records resulted in identification of other species thought to be extinct/extirpated, which in turn has led to the identification of new populations of species not previously recognized.

This past fall, I was fortunate enough to partner with the New Hampshire Natural Heritage Bureau (NHB) to perform such a review utilizing herbarium records contained within the Consortium of Northeastern Herbaria (CNH) database. The review consisted of researching 43 rare plant species by cross referencing NHB records against records that were obtained from the CNH database. The goal of this exercise was to identify records of plant species occurrences that may not be contained within in the NHB database.

NHB is responsible for facilitating the protection of the state’s rare plants and has limited resources.  Review of records from other reliable outside sources such as open-source herbarium databases like CNH can provide additional information that once verified, has the potential to be incorporated into the NHB database. Review of historic records can also provide information that can assist with our understanding of what has occurred within certain areas that has resulted in the loss of a plant species. Expanding upon the state database is one way of supporting NHB’s mission for the conservation of rare plants to ensure their survival and a rich and diverse ecosystem in New Hampshire.

During my review, individual species’ names were entered in the CNH database search field and the results of the search were then sorted by state to isolate New Hampshire records that contained geographic coordinate information. These records were downloaded and compared to the records that were in the NHB database using ArcGIS. The review identified three plant species that were recorded in the CNH database that that were not in the NHB database – as well as 231 additional location records for plant species that are in the NHB database but were different from the records that NHB had due to date of observation or geographic location. In essence, while NHB had a record for a particular species, this type of identification results in the possible identification of a species in a different location than what NHB had. Once the review was complete, the data was given to NHB to be evaluated. If warranted, NHB will conduct field reconnaissance to confirm if the species are still present in the locations that were identified as a result of the record review.

NHB has developed an online Datacheck tool that is linked to the NHB database and provides an easy way to search for plant records by location. Most state 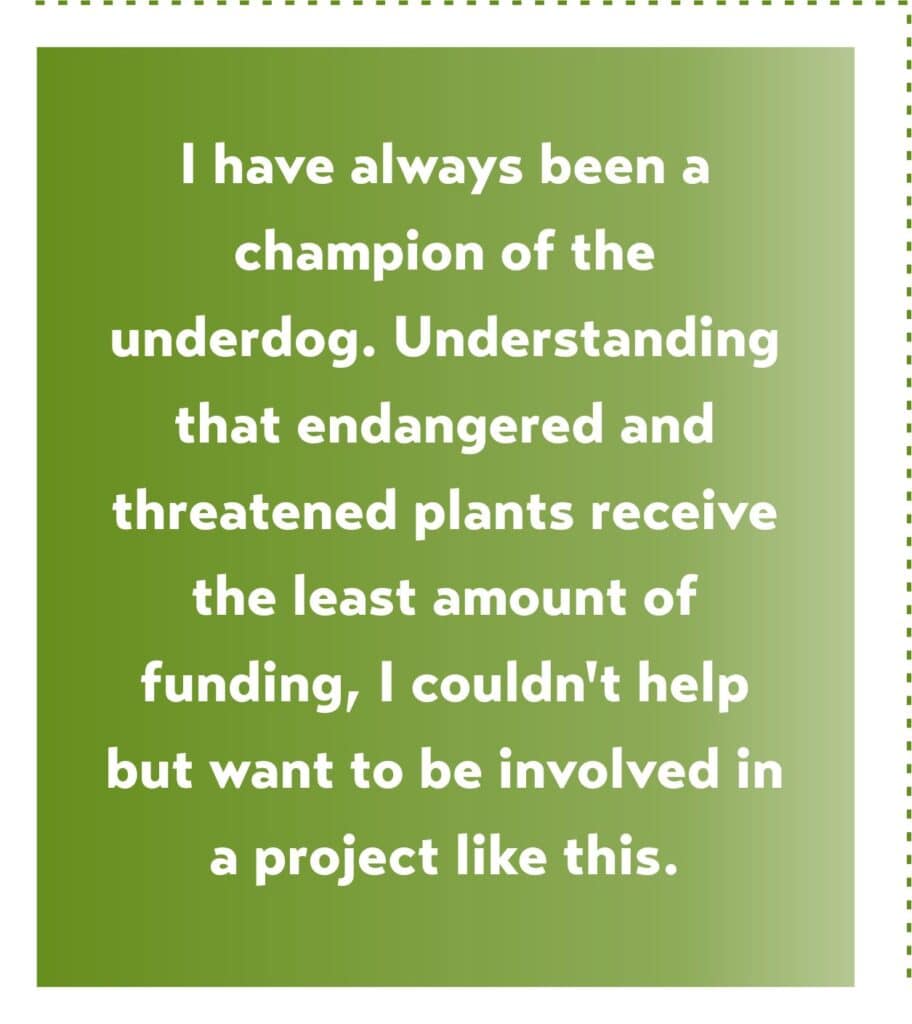 environmental permits require completing the Datacheck search for the area for which a permit is being sought. Should a rare plant or its habitat be identified through a Datacheck review as being located, or potentially located, on a site, consultation with NHB staff is necessary to determine avoidance and minimization measures to ensure the protection of that plant’s species. Additionally, landowners can also utilize the online Datacheck to evaluate their land prior to developing or altering the land. Having a more complete and robust database will allow for increased protection of rare plants in New Hampshire.

I have always been a champion of the underdog. Understanding that endangered and threatened plants receive the least amount of funding, I couldn’t help but want to be involved in a project like this. I not only learned a lot about these rare plants, but I also met some really outstanding people who are passionate about this cause, and I was honored to be able to assist and do my part to help with the preservation of New Hampshire’s rare plants.

Do you have a project that needs the expertise of passionate environmental scientists? Contact us! 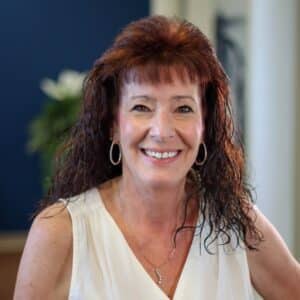 Deb is an Environmental Coordinator based in our corporate headquarters. She works with all engineering disciplines for NEPA and permitting needs. In pursuing her environmental science degree, she has found a love for everything wetlands, the habitat, and its occupants – plant or animal. Deb is looking forward to strengthening her knowledge of wetlands and their functions and values through the onsite work that she does with Hoyle Tanner’s own Certified Wetland Scientist. When not working Deb enjoys her down time reading, redesigning rooms in her home, and traveling to Europe with her mother Meg and to more tropical destinations with her husband John.